Went to See Adele in Concert 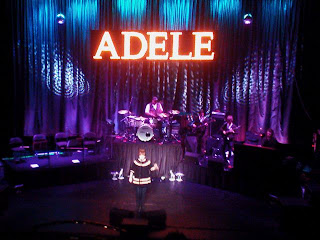 On Sunday 4th May Paul and I went to see Adele at the Alexandra Theatre in Birmingham and she was absolutely fantastic.

I loved her first single and was soooo impressed with her voice. I was gutted when I realised she was playing a small gig at the Glee Club and it was sold out. Just when it was announced she was up for a Brit award this extra date was announced and I knew I wanted to go straight away. Paul initially didn't seem to be very enthusiastic about going so I booked it just for me and then he said he wanted to go to so I sorted out a ticket for us both.

I've never been to the Alex before and the best tickets in the middle seemed to be in the dress circle. We were right in the middle and the stage seemed really close.

The support act Elviin was really good. Never heard of him but really strong voice and was well impressed.

Adele was just blooming amazing. So good that Paul was impressed ( I knew he would like her !! MEN!) Her voice was amazing and she was exactly in tune. If anyone gets a chance to see her live you must do it, she was very good. The above piccie is courtesy of Paul's phone !
Posted by Made by Mandy at 17:51