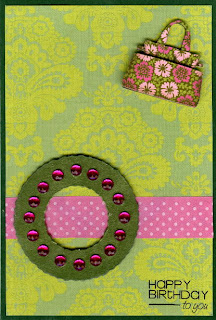 Today is the first day I have made a card in over a week. What with the family BBQ and Bank Holiday Monday, then taking Paul to Manchester for a meeting (don't like driving in the traffic round the Trafford centre, that was a nightmare!) it's been a busy old week.
Paul's Grandad was told on Friday that the funding has been agreed for his home care, they just need to arrange it now so he will be out from hospital soon. I don't think anyone envisaged that he would be in for over 2 months when he was admitted. He still needs to have an operation on his prostate and has a catheter fitted until then. The specialist won't see him for another 3 months as he has a sore on his heel that had got infected in hospital and it's not healing up very well. I guess 88 year old skin just doesn't mend as quickly as it did in it's younger years.
In the meantime I have been applying for jobs as I need to get back to work. There doesn't seem to be an awful lot about though, Credit Control and HR seem to be the few job types available, neither of which I am qualified for. I have this super duper exam I passed in transport and it's worth nothing if that industry isn't hiring at the moment.... oh well, there are a lot of people who are worse off than me. At least I've got a roof over my head, a bit of savings (fast dwindling at the moment though) and a wonderful husband.
The weather has been gorgeous so I've been trying to get on top of the garden. It's been a very wet year so far and the weeds had got bad. I'm getting burnt so easily this year so having to be careful how long I am out in the garden and wearing SPF 30, I've never needed to wear such a high factor before. My marigolds are growing so well, I am hoping to take photos tomorrow when I've arranged the pots on the patio. They are all in a line up against the house at the moment and are so colourful. I can't believe how much they have grown in such a short time. It's definitely spurred me on to have a go at planting more colourful pretties.
Anyhow, less about me and more about the card. I have used todays sketch for day 92 at 365 Cards for the layout (I'm so behind on the challenges now.....) The base card and the rub on sentiment is from a Let's Make Cards pack. The paper is half a printed K & Co card with an Amy Butler design. The circle is a pearlescent frame from Kanban embellished with gems from Paperchase. The spotty ribbon is a gift from my MIL which she had tied around a gift package. (she is lovely and saves lots of little bits for me for cardmaking) The handbag is a gorgeous layered sticker by K & Co that came in my prize from the Cuttlebug Blog Hop.
Considering I don't like green I love the paper on this card and think I must be warming towards the colour now as I am starting to use it more. I absolutely love the new Lime Rickey from Basic Grey and that is on my wishlist to be bought as soon as I start earning some money again. I've got so much paper I REALLY DON'T NEED it but it is just so scrummy I think I've got to have it at some point :)
Posted by Made by Mandy at 22:32

You have had a busy time, I love the card and the handbag is so cute
maz

Love this! I love these colors and your bling is perfect-o!

luv the colors and that purse is fantastic :D

Love the card Mandy. The purse is absolutely gorgeous!! I know exactly what you mean about the money situation lol. Hang in there that's all you can do atm.
Hugs
Michelle

Mandy, great card and I love that Amy Butler purse. Good luck on the job market. I have been unemployed since February the job market is bad here too.

Super cute - beautiful job. Be careful with the green...it will grow on you. Used to hate it - now it's my favorite color (especially limey green).

what a cute card!

this is so cute! love that purse!

That little purse is adorable. Keep your chin up with the job hunt. SOmething will come along, and I hope its more wonderful than you ever hoped for. Loves~
k