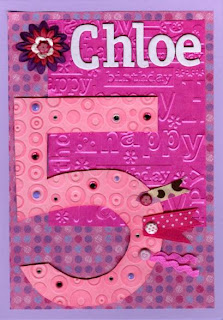 Our friend Phil brought my car round for me Saturday afternoon. WOOHOO !!!!

He mentioned that it was his grand-daughter's birthday the following day and he said he was going to buy her card and pressies. As he was stopping for a couple of beers I offered to make a card for him and he jumped at the chance ! I have made cards for Chloe and her Mum before and Phil is a rare man who appreciates the work that goes into these cards.

I used HOTP paper from the Citrus Cardmakers pack for the backing, Cuttlebug embossing folders for the Happy Birthday text and the '5' which was cut from card using a template I made in Word.

I embellished the card with Papermania brads, ribbons and a bit of sparkle. Used some pretty flowers and chipboard letters from QVC. He was delighted with the card.
Posted by Made by Mandy at 08:24