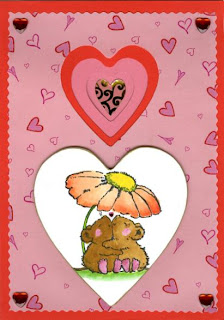 Friday was our 6th Wedding Anniversary.

Basically I was dreading turning 30 and we were going on holiday to America, one of those 3 centre holidays New York, Las Vegas & Los Angeles. It had been booked for ages and 6 weeks before we were due to go he announces that we are getting married in Vegas on my 30th Birthday.

After picking up jaw from floor my task was to get it booked and it was to cost less that getting married at the Stratosphere hotel where we were staying. 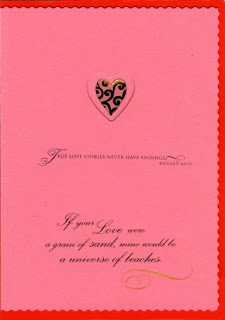 All told our wedding cost £500, photos, outfits, ceremony etc all in and it was the most wonderful and romantic day and passed without a hitch.

This is the card I made to celebrate our anniversary which tied in with a challenge on the Just Bex forum. I love it when I can do a 2 in 1 card !

I made it as a 3 layer card so the hearts were cut like windows getting ever smaller.

Layer one at the top the stamped image is a Penny Black from a forum swap. 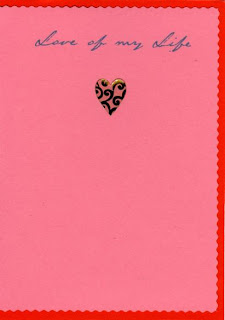 The hearts were cut using a Fiskars template. The top layer is a vellum paper that I bought at the NEC. The other gems were used to hold the paper down at the corners and hid a bit of adhesive.

The second layer is a card insert with another heart cut out and the sentiments are DCWV rub ons.

The third layer is the inside of the insert with another rub-on and the domed sticker is Papermania to add texture and make it really stand out.
Posted by Made by Mandy at 11:35