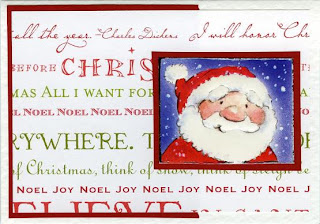 Friday Night Challenge for the 19th October on Just Bex was to make 5 cards with Santa on them.

This card was made using DCWV paper from 2006 stack. The image was from an old Christmas Card and the red paper was from my scraps box, which I am desparately trying to use some of. 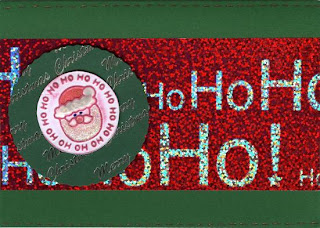 This card was made using a Cuttlebug embossing folder which I inked in red to highlight the embossing. I coloured in his hat with a glitter gel pen. The white trim is applique embossing fluid which is raised and has a nice shine to it. The beard is a glitter snow writer pen, but I didn't think it was glitter enough so added more ! Santa is layered onto one of those Kanban pop out frames.

The paper is from a scrap paper kit from Home Bargains last year and is holographic.

The top and bottom edge of the card have a dotted line using the gel pen but it hasn't scanned in as shimmery as it is in real life. 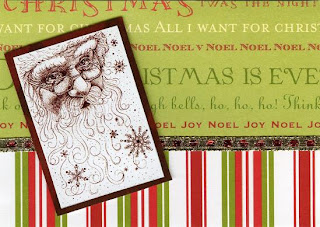 This card was made using DCWV 2006 pad again, Papermania ribbon. The santa image is cut from a magazine advert. 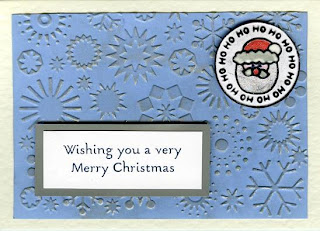 This card was made using another Cuttlebug image, a large embossing folder for the background paper highlighted with silver ink. The sentiment is a recycled Christmas card matted onto a silver scrap of card. 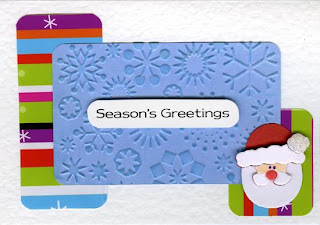 Cuttlebug embossing folder has made an outing on this one as well, highlgted with a blue ink. Santa is a layered Sizzlits diecut, the sentiment is an old card and the patterned paper is from some gift bags I spotted in Asda yesterday. I have lots of little pieces so you will see it popping up regularly.

Loving doing these challenges, getting my Christmas cards made early for a change.
Posted by Made by Mandy at 13:48