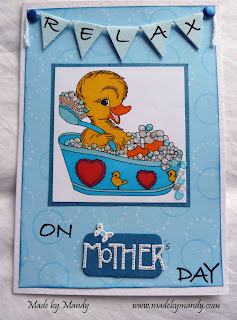 First of all Happy Mother's Day to all my friends not in the UK. Goodness only knows why we can't have it all on the same day all over the world though, doesn't make any sense to me.....
This card is a variation of one I made in March for my MIL for Mother's Day. A house guest of ours saw it as I was blogging it and asked if I would make a card for his Mum. He is from South Africa and would be sending it to her by the postal system so I said I would adapt the design to make it less prone to get damaged in transit.
The fabulous image is called Rub-a-Dub-Dub and is designed by Stitchy Bear. You can purchase it in the Stitchy Bear store here
The image has been coloured with Promarkers and I have added some stickles glitter and Papermania glitter dots to highlight some of the bubbles and added some to look like there were bubbles that had spilled out of the side.
The blue paper is from a big QVC Colorbok pack and I have added ink to the edges of this and the paper too. I made the banner from scraps of card and added rub on lettering. I have strung the flags onto white wool and 'pinned' it up using Craftwork Cards Candi.
The Mother sentiment is a Sizzlits die I bought in the sale last year. I think it cost me just 49p and I knew it would come in handy. I cut it in blue 1st and then layered a white one on top adding some little black dots and a gem on the butterfly. The rest of the sentiment was made up using the rub ons.
Our friend Jean was delighted with it. We are not sure if it has arrived yet so keeping our fingers crossed. By all accounts things go missing in the post all the time in S.A. so hoping that this gets through to her okay :)
I'd like to enter this card into the following challenges (in Alphabetical Order):-
Posted by Made by Mandy at 22:25

Mandy, this is cute. Thanks for the comment on my card at designsbydj.blogspot.com The butterfly is a die by Cheery Lynn Designs. I believe that if you click on the name on my post it will take you directly to their page. If you buy something, would you tell them that I sent you? I don't get anything from it, but I'd like them to know that I'm spreading the word about their wonderful designs. The one I've used is the medium size. Once you get there, it will be difficult to choose just one thing. I love their doilies also and their flowers, and their embossing plates, and.....(You'll understand when you see what things they have.) They will have more new releases on May 15th. Woo Hoo! Just say dj (Debra) sent you. You may be able to put that in the comments form on the order. Thanks, hugs, dj

this is soooo sweet!!

Adorable card! I love the banner. Thanks for joining us at Delightful Challenges.

What a darling card. Thanks for joining us at Aud Sentiments
Hugs,
Julie

Fantastic Card! Great take on the die cuts and punches challenge! Thanks for playing along with the Wags 'n Whiskers Challenge!
Come back next week for our blog hop and release on May 20th!!
~Lacey
www.stampandcreate.com
Wags 'n Whiskers Rubber Stamps

What a fabulous card - and love that image, he is so cute! Thanks for joining us at Whoopsi Daisy thsi week and good luck! Hugs, Teresa x

What a sweet card hun! Thanks for joining our Aud Sentiments Challenge! Hope to see you again.
hugs, Denise

Really cute card!
Thank you for joining us this week for our anniversary challenge. Don't forget the blog hop-opportunity for a prize!

How wonderful of you! Isn't very often that a guy would care about such things?? Thanks for sharing with us at Whoopsi Daisy ;-)

Super cute! I love the little banner you added.


Thank you for joining our “Anything Goes” challenge at Sentimental Sundays .

This is adorable!!! One of my favorite images at Stitch's store. Love the banner and coloring!!
And I agree, I wish a lot more of our holidays were the same dates as the UK

hahahaha..now how cute is this!!Certainly puts a smile on my face! Thank you for sharing with us at Betty Bee's Buzz!

A fabulous card,thank you for joining us on this week's challenge at Creative Stamps Friends,
Hugs Michaela

Thank you for taking part in Spots & Dots challenge at The Crafty Pad!

So happy you've joined us!

Oh, such a sweet card.
Thanks for joining us at the Fairy Tale Challenge.
xx Sandra

Oh this is SO sweet. I love the combination of papers and colors these are just PERFECT! Thanks for joining the Catch the Bug Challenge for our May Anything Goes!!, Good Luck! I hope you'll join us again.

great job on this! thanks so much for playing with Bugaboo's Anything goes challenge! Joy DT

Your card is amazing. Thanks for joining Cutie Sunday ....

Adorable card! Thanks for joining us at Craft Us Crazy! We hope to see you again next time!