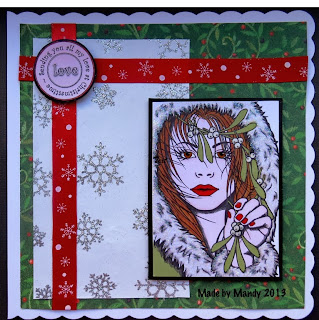 May I present to you the card that I made for my hubby for Christmas using this gorgeous image Mistletoe Kiss from Delicious Doodles. This is the first Image I have coloured since July. Unfortunately late December lighting has meant that my photography skills were non too clever so you can’t really see the subtle shading on her skin. I coloured her with Promarkers and added a layer of black card underneath.

I used Glossy Accents on her eyes, lips, nails and the berries on the mistletoe. I used stickles glitter glue on the fur trim of her coat so it really sparkles.

The paper I used is from K & Co and the snowflake paper was a wonderful find in a gift shop. It is handmade wrapping paper which has so much glitter on the snowflakes. It is a lovely quality and far too nice to use as wrapping paper.

The sentiment is a freebie from Netty’s Cards coloured with Promarkers and mounted onto some black card. The ribbon is a bargain from one of the poundshops.

I would like to enter this card into the following challenges (in Alphabetical Order):-

I used to make cards and be on Design Teams and blog. It all seems like such a long time ago as my life has had to change due to some health issues.

I did not feel able to disclose what the reason was before due to a mixture of emotions, which I will explain below but basically I have been diagnosed with Type 2 Diabetes.

We went on holiday to South Africa and had an amazing time. However when we came back I was so tired. No matter how much sleep I had it wasn't enough, I was literally exhausted and having trouble getting through the day.

Before I went on holiday I was having trouble with my neck and shoulders and a fabulous new doctor  at our surgery had arranged for me to have a scan at the hospital. She also arranged for me to have a 24 hour blood pressure monitor as I have 'White Coat Syndrome' which makes my blood pressure rise massively when I have it taken by a professional. The goon news from having this monitor is that despite being treated for high blood pressure for over 20 years I now do not have high BP. Finally I feel like I have a doctor who is willing to listen to me and not treat me like an imbecile.

I bite the bullet and mention to her that I have had a yeast infection all year that I just have been unable to get rid of. I have tried all the over the counter stuff, all the old wives tales and ph balanced cleansing products but just nothing had worked. She suspects I may be glucose intolerant and arranges for me to have a fasting blood test.

After a couple of weeks of medical appointments and tests it now appears that I have Diabetes with further complications of kidney failure and high cholesterol. It is likely that I have had it for 3 to 4 years before it started to show itself. The 13th September is the day my life completely changed. The specialist diabetes doctor was telling me I what I needed to do and who to see, appointment for this and that and inside I was screaming. I remember getting to my car and it was torrential rain and I was crying so hard, it was like the earth was crying with me. I phoned my hubby and just could not stop crying.

My Mum had died 4 years earlier and we had a strained relationship  so hadn't spoken for the last few years. Her GP had told me that a major factor of her dying was developing diabetes when she turned 50 so I had made so many changes to my own health and diet in an effort to prevent it developing in me. The irony is that I probably already had it all that time. I had told my GP when she died so they knew it was in my family. I do not know my birth father but it turns out he had diabetes too so I had a 75% chance of developing it. I felt very sorry for myself initially and then this turned to anger. I have had a rotten few years with mental heath issues and just when things are looking up this goes and happens. I was feeling very low but really really proud that I didn't slip into depression. I just took stock of the situation, pulled on my boxing gloves and stared to fight.

Basically the original plan was through diet and lifestyle changes to try that for 3 months and see how the numbers reduced. The kidney failure means that I am already under a lot of strain and unable to add further risk so I have had to go on diabetes tablets and a statin to reduce the heart risk. (Mum died of a massive heart attack so very real risk!)

I need to lose 45KG (100 lbs or 7.5stones) for the doctor to consider taking me off the tablets. I have a work colleague that weighs this so it seems and insurmountable amount of weigh to lose. I also need to do exercise every day (that was a dirty word to me....)

The good news is that since my diagnosis I have lost a stone in weight, I walk to work and back each day (1.5 miles each way), personal trainer at the gym twice a week. Portion sizes on food half what they were. I was fortunate that I was eating the right things just too much in one go so the changes I had made before have made it easier in the long run although I just didn't see it that way at the time.

I had my first set of blood tests on Friday and await the results. This will show how the last 3 months have affected my numbers. I had my retinopathy scan for my eyes and that came back clear. I am very grateful for that as one of my hubby's work colleagues who has been newly diagnosed too was not so lucky and has had laser surgery on his eyes.

This whole situation has made me put my health first. Diet and exercise have had to be a major focus as I need to get the diabetes under control. At the moment it feels like it is controlling me and I know it is early days. I am grateful for all the help I have been given from the professionals, all the support I have had from my friends and family and the internal strength to keep fighting.

I am unable at present to do crafting at the same level as I did before, I simply do not have the time at the moment. I do however have some projects that I made that have not been blogged so I will add those over the next month. I have switched from PC to Mac and am doing some housekeeping and trying to get used to using different program and doing things a different way.

Also my good friend and DT colleague at OSAAT Choccy has started doing Stampin' Up demos and I have been to the 2 she has done. Initially to see my buddy and give her support but also to coax me gently into making some cards again. In the meantime Hubby is panicking that I have a craft room full of stuff that isn't being used......

My good friend Lisa has a challenge blog at The Path of Positivity and the theme this month is Thankfulness. Now it may seem strange to say I am thankful for having diabetes but let me explain. I am thankful for the diagnosis, I am thankful that I was brave enough to mention to the doctor that I had a problem 'down there'. If I hadn't felt comfortable enough to say something to her I would still not know now.

I have been overweight all my adult life. I have dieted on and off, I have exercised on and off but never stuck to it. There have been numerous reasons, I have had mental health issues and it took a lot to admit that I binged on chocolate and rubbish, thud making me fatter and in my eyes more unattractive because I absolutely hated myself. I went on a cruise some years ago. I was able to fit into the smallest size I have as and adult and have some lovely clothes that I want to slim back into.

In preparation I dieted and went to the gym and then developed sciatica and they would not have me back. Now the doctor has sent me to the gym for medical reasons so they cannot refuse to have me which keeps me motivated too. I have the best reason of all to diet and keep this up as literally my life depends on it. I am 42, hopefully still young enough to get this under control and thankful that this has happened now rather than later in life. I am a strong believer that everything happens for a reason. Despite dark days and even darker times in my life I have always hung on to this. It has got me through before and it will again!
Posted by Made by Mandy at 15:21 11 comments: