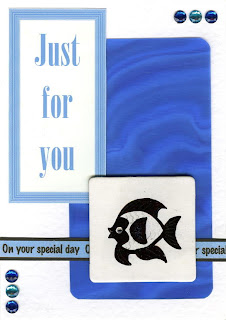 It's day 58 at 365 Cards and the challenge today is to incorporate something fishy into your card.
I have used the latest sketch over on Di Hickman's blog for the layout. It is perfect as I wanted something quite simple.
The starting point was the chipboard shape, the fish was red so I coloured it black with a permanent Sharpie pen and highlighted it with a bit of Sakura clear glitter pen and a Papermania gem for it's eye.
The shimmering panel at the back is a piece of illusion film which is a sheet of textured plastic which moves when you tilt the card, it's like those ruler's with moving scenes on that we all had as kids. I liked that it looks like waves and always saw me using it for this type of fishy card. However, it has been in my stash for years and unused up till now. Sound familiar anyone ?
The sentiment strip and panel are from a Making Cards Male Special issue and the card has been finshed off with some blue gems from Poundland.
Posted by Made by Mandy at 11:30

I wish our local pound shop had crafting supplies, it seems to be full of all sorts of crazy alternative food and gardening supplies!

That film is perfect for this! Lol! It is familiar! Sometimes I come across stuff I don't even remember I have! That's my excuse for having everything open all over the place so that I can see everything that I have!

I hate weekdays as it means unless I get up stupidly early I have to wait until after work to get started! Roll on 4pm!

Love your take on today's challenge...great use of the textured plastic!

I luv your card and how you managed to make use of forgotten stash! To answer your previous question, I'm from Yardley! :)

Fishies are so much fun to work with, aren't they? You did an awesome job!

I love this card! The textured plastic was the perfect item to add pizzazz!! Great job on the challenge!

I love your take on today's challenge, off to try and find Fish now for mine

This is really cute!
Chrissie

Great card Mandy! Love it! Little fishy is too cute! Thanks for joining in the sketch challenge!

Great card, Many! I love your fish. It is so vivid against the rest of the card. I love it!

This is very cool. Nice use of multiple techniques!

Love the blue...looks like I need to go with hubby next time he hits Lowe's.

Great take on the theme! I have to admit I'm going to agree like the other posters here that the illusion film is an awesome touch!

Lovely card, hope you are well.