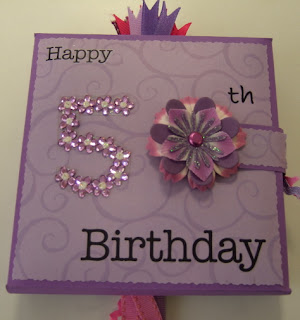 This is the most ambitious project I have done so far and I am so amazingly proud of what I have made.

The book was inspired by an article in Papercraft Inspirations and is called a meandering book. The original project was made using a single piece of 12" x 12" cardstock cut into a particular design using a template supplied in the magazine. I had a go at this and decided for this it was going to be too small so made one using the same design but with 5.5" square pages instead of 4"

The idea was that each family member would have a photo on one of the flaps and there is a tag behind each which has special birthday sentiments that each person wanted to have included. There are also photos with her husband and behind these poems and a sneaky tag from me. There is also a fold in the very centre of the card which hides a sentiment from all the family.

This was a very special project for someone I know so it made it a more personal thing to do. When I first made the size of card I thought it was going to be too empty but by the time the papers were added, then the photos and tags it became a lot fatter and we struggled to close it. You wouldn't believe how heavy it turned out in the end. I made a box for it and wrapped it in tissue paper for presentation.

The fastening was made using a velcro square which is hidden under the flower '0' in the 50. I have beaten my previous best for Prima usage - 90 on this project not including the other flowers on the front !

I have been told it made Alison cry for ages and she won't take it out of the house so no one can see it unless they come round.

Please see below a slideshow with all the photos of it. The ribbons that are sticking out are where the tags are hidden.