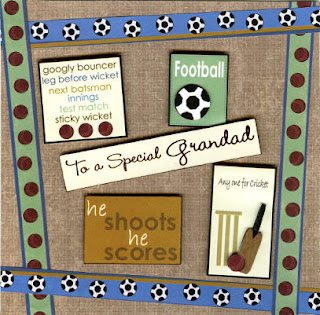 It's Paul's Grandad's Birthday tomorrow and this is the card I have made for it.

He loves watching his sport on TV and I used the Dovecraft Masculine paper pack as the main inspiration.

I used an older sketch from Tamara as a base for the design.

The main backing paper is HOTP from a floral creative pack I had as a QVC TSV.

I used borders of football and crixket balls to frame the design and cut out elements from one of the papers for the centre. I decoupaged the football and cricket bat from another sheet.

The sentiment in the middle is recycled from a shop bought card.

I think the recent blog hopping has influenced me again as I would not normally make a card that is 'wonky'. everything would normally be very neat and square and I think I am learning that it's okay to put something at an angle and 'live a little'. It's great to see so many other designs and I really think I will learn from them.

Just got to get him a present today now. What on earth do you get for an 88 year old Grandad ?
Posted by Made by Mandy at 09:14