The Ting Tings in Concert 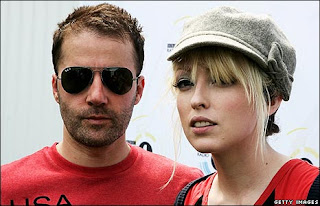 Went to see the Ting Tings in concert last night at the Carling Academy in Birmingham and they were really good.

We saw them at the Irish Centre in June just after they had gone to number 1 in the singles charts. I'd bought the tickets months before as I heard a song of theirs on the radio and thought it was such a catchy tune and they were going to be BIG! The gig was great and as I'd bought tickets before I received notification of an advance booking on the next ones.

It was a much bigger venue than previous, but still quite low key. Katie was fabulous on vocals and I was on the balcony alongside the side of the stage and had a fantastic view of her performing. Unfortunately I could only see the drummer Jules (mmmm!!) when he came and went off stage, but he did do one of the songs on guitar at the front and I had a fabulous view of him (mmmm) He's a bit yummy. The sound was fantastic and the drumming was freally powerful, it were brilliant.

I went with Paul and our friend Garry. Unfortunately his girfriend Hazel was really poorly and she couldn't come. Gaz was very impressed with both of them although he knew none of the words. I was singing along all the way through ! It was a briliant night. I love concerts me!
Posted by Made by Mandy at 20:39

Glad you had a great time Mandy.